You may recall my mention of a little comic I did called "Surplus Property" (though you probably don't remember, since its been dormant so long). It is the first story of a character called The Suit, a collaborative effort with the fine Adam McGovern. Its a short vignette about a bygone era erasing another, and a lone few willing to fight for a place's right to survive.

The ink's been dry for nearly a year, and with a few publication offers being dangled, we've been waiting in the wings to showcase our project. As things do, they didn't go quite to plan. We had a few setbacks, but thanks to a promise kept by Dean Haspiel and Adam's diligence, I'm happy to announce that "Surplus Property" has now found a home on Trip City, "a Brooklyn-filtered arts salon." You can read the comic, plus all about it here, http://welcometotripcity.com/2012/05/the-suit/. 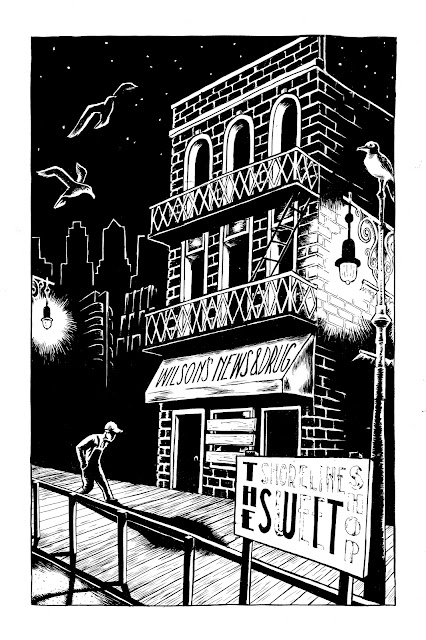 As mentioned in a previous post, I was invited to participate in a gallery exhibition at Ltd. Art Gallery in Seattle in conjunction with last weekend's Emerald City Comic Convention. When given the prompt to do "comic book themed art" I had to decide on some characters to base a piece on. As a longtime fan of Tony Millionaire, as well as my affinity for animals (crows in particular), I ultimately I decided on doing my take on Maakies with this piece. 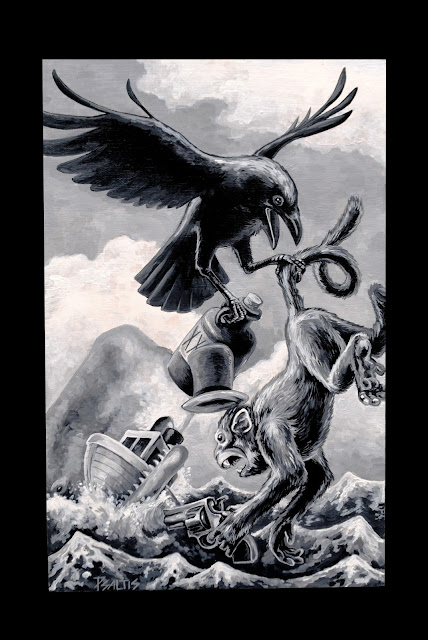 I titled this Poor Man's Millionaire, its sumi ink and gesso on wood, and it will be on display at Ltd. Art Gallery until the end of April.
at 1:12 PM 1 comment:

Every year on April Fool's day my good buddy Josh Shalek invites a guest artist to commandeer his outstanding comic strip "Welcome to Falling Rock National Park" for the day. This year he asked me (or maybe I asked him, who remembers?) to be this year's guest artist, and this was my contribution.

This weekend I'll be making my first appearance at the Emerald City Comic Convention in Seattle sharing a table with Matthew Ocasio.

In conjunction with the convention I was invited to contribute to a gallery show called MINTcondition at Ltd. Art Gallery on Friday night. If you're attending the convention, duck out early and walk around the corner to see the show. 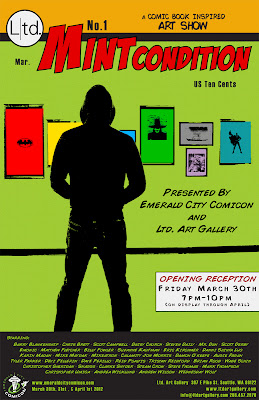 If you want to see my piece you have to attend the reception (or check back here on Saturday).

After ECCC I'll be exhibiting at four more conventions this year, Stumptown in April, CAKE in June, Comic-Con in July, and SPX in September. Apologies to APE and all my Bay Area buddies, but a trip to San Fran just isn't in the cards this year.
at 10:38 PM No comments:

The original cover for Hells Dachshunds was only published out of duress, since I only managed to get them printed days before APE. I'd meant to put together a more polished version, and now, once again under pressure with an impending convention, I've made good on that goal.


I'd also intended to make them available in two and sizes, standard (4.5x7) and minature (3.19x5.25). Hopefully I'll have copies of both put together in time for Emerald City. If not, you can get them at Stumptown.

This summer proved to be pretty unfruitful in regards to art production, but I made up for lost time in the fall. With a few commissions, some gifts and some new personal projects I was able to end the year on a pretty productive note.

Here's what I've been up to:

Those of you who saw me at A.P.E. know that I scrambled to put together a new short comic for the show called "Hells Dachshunds." Somehow it evaded posting on the blog so here are a few sample pages. 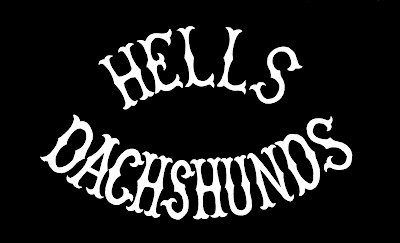 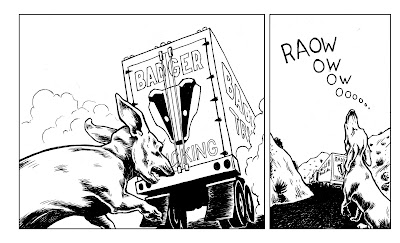 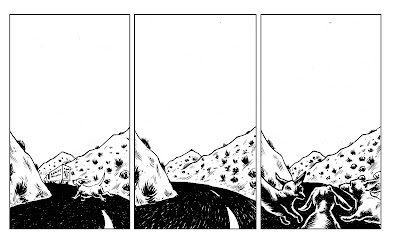 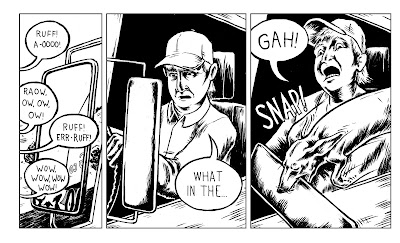 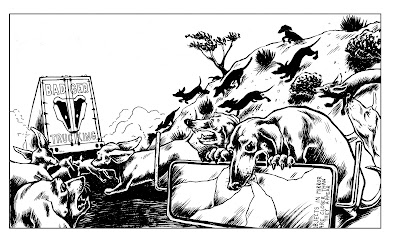 Commissions beget more commissions. About two months after putting up a commissioned painting on the walls of Park Kitchen, two customers asked for similar pieces. Both of these are for private residences, so unless you bought them, this is the only place to see them. 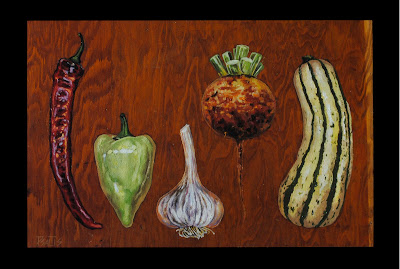 I logged some hours at the drawing table as well. Friend and comics comics creator Tyrell Cannon asked for a some pin-up art of his character Simon, and here is my contribution to his collection. 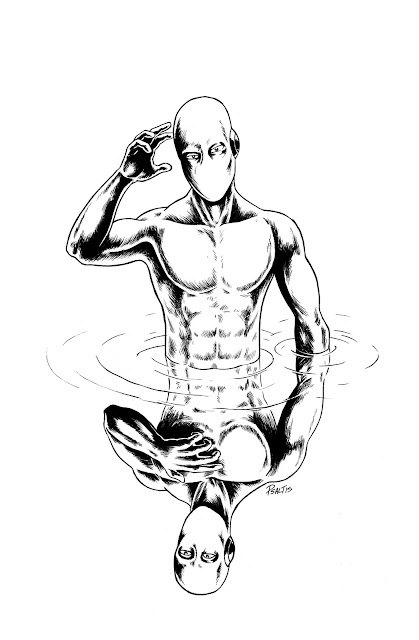 My cousin Kyle also asked for a commissioned piece to give to his dad. Back when Kyle and I were thirteen and superhero obsessed we teased my uncle about his compulsive cleanliness, dubbing him "Immaculate Man." Inspired by a notorious b-movie poster I did this drawing to be turned into a t-shirt. 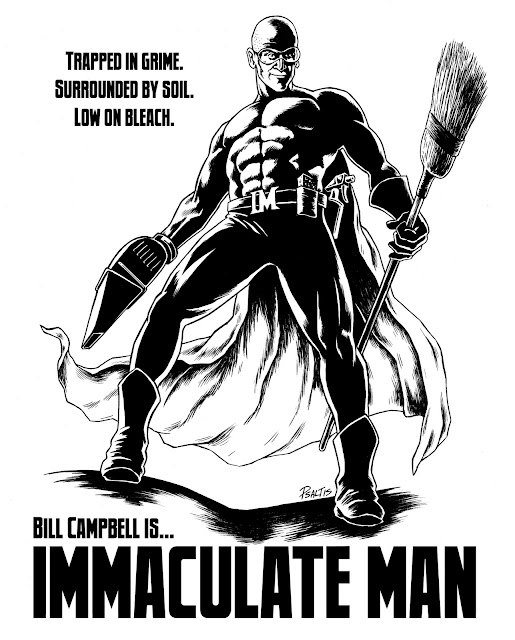 In a few days I'll be putting up a show of paintings at Portland's Caffe Vita. Back in November, when arrangements were made, I feared I wouldn't have enough work to fill the walls. With a little diligence I more than doubled my stock of tool paintings, and now have an ample stock for showing. These (with the six in my last post) are the fruits of my recent labors.

The show runs through February, with reception date still to be determined.

Lastly, I returned to a previous source of inspiration, my dog Millie (the original Hells Dachshund) to put together a gift for my girlfriend, Nan. 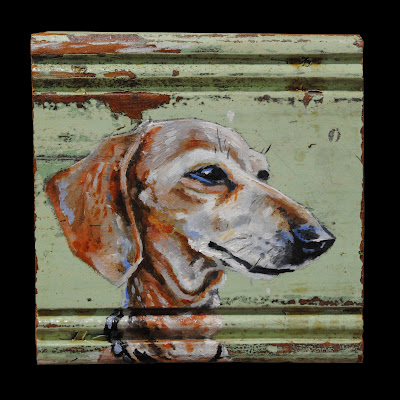 I would hope to maintain this level of productivity every season, but I know that there is an ebb and flow to these things. Realistically I just hope to things stay consistent, and I can post more regularly instead of a major blog dump every four months.

A few finished pieces for the upcoming show at Caffe Vita.

A Source of News and New Art From Reid Psaltis

Reid Psaltis lives in Portland, Oregon where he draws things he likes. More of his work can be seen at reidpsaltis.com

To learn more about this blog please read the first post.